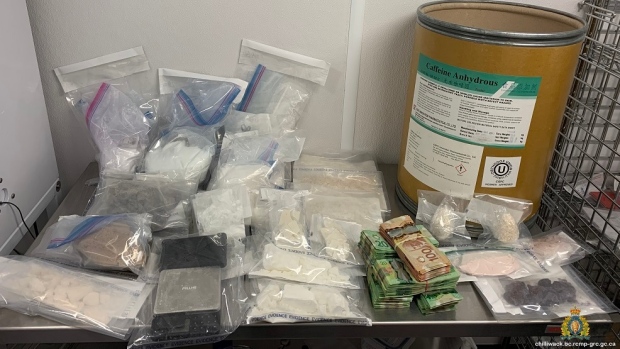 Posted at 01:02h in Fentanyl, First Responders by admin

An investigation that began in Chilliwack late last year has led to a small drug bust in that city and a much larger one in Surrey, according to the RCMP.

After gathering evidence, investigators executed search warrants at five addresses, one in Chilliwack and four in Surrey, last month.

On June 5, Chilliwack RCMP seized small amounts of methamphetamine, fentanyl and cocaine from a home on Princess Avenue near Young Road. Police also seized a revolver, ammunition and a vehicle during the search, and arrested two people.

One week later, on June 13, Mounties from Chilliwack and Surrey executed search warrants at four addresses in Surrey: One on New McLellan Road near 120 Street, one on 172 Street near 23 Avenue, one on 176 Street near 16 Avenue, and one on 194 Street near 94 Avenue.

In total, those four warrants yielded the seizure of 2.4 kilograms of methamphetamine, 590 grams of cocaine, 320 grams of fentanyl, one litre of GHB, 16 kilograms of caffeine and 2.8 kilograms of an unidentified powder, police said. Officers also seized paraphernalia associated with drug trafficking, $35,000 in cash, and another vehicle. Three people were arrested.

All five people who were arrested were later released from custody. Police said evidence would be referred to the Public Prosecution Service of Canada for charges under the Controlled Drug and Substance Act.