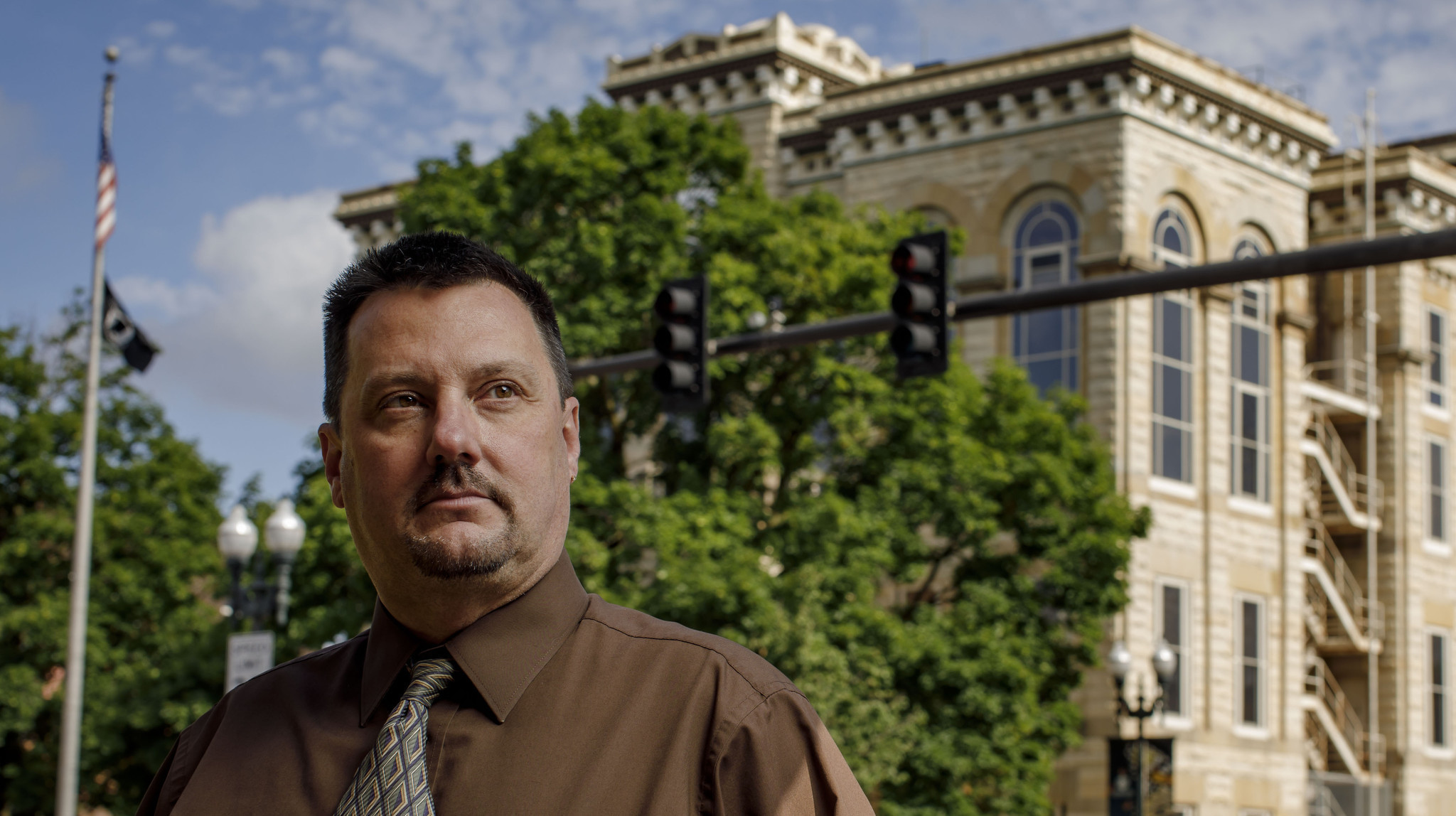 Posted at 11:39h in Fentanyl, First Responders, Overdose by admin

Defense attorney Eric Miskell represented numerous drug dealers over the years, and by his account he was good at his job. He knew how to find loopholes and technicalities that would get testimony stricken, evidence thrown out and charges dropped.

But three months ago, he underwent a radical change of heart about his work when a former client named Nickie Martin was found slumped over on a motel room bed. She had died from a heroin and fentanyl overdose.

Miskell was stunned. He had seen Martin only a few hours earlier, and as far as he knew, she was doing well. She had gotten good reports from the center where she received treatment for her long-standing addiction and had recently regained custody of two of her children.

Her death was the kind of tragedy that has become commonplace in this small community 75 miles southwest of Chicago. LaSalle County had 39 fatal overdoses in 2018, which, given its population of 110,000, amounted to one of the highest opioid-related death rates in Illinois.

“It almost hit the community like a nuclear bomb,” said Brian Vescogni, a former drug prosecutor now in private practice. “We weren’t prepared for it, and it’s gotten worse. Without (the overdose-reversing medication) Narcan, you’d have 20 people dying a month, minimum.”

Martin, 31, wasn’t the first of Miskell’s clients to die of an overdose, but the futility of the work that went into her recovery angered him. He was furious at whoever supplied the fatal drugs to Martin, believing if the dealer were ever caught, the punishment prescribed by law would be insufficient.

Miskell vowed to stop representing accused drug dealers. Then, sitting in his law office after Martin’s wake, he went even further: He composed a three-page letter to Gov. J.B. Pritzker and President Donald Trump, arguing that the war on drugs hasn’t been tough enough.

“I am asking the State of Illinois and the United States Government to consider making the sale of illegal opioids an act of domestic terrorism with dealer terrorists punished accordingly,” he wrote. “All illegal sales of opioids should be a class X felony regardless of amount with a minimum sentence of 12 years as a first-time conviction.”

It was a remarkable proposal coming from a defense attorney. And as you might expect, it hasn’t been well received from others in that line of work.

“A large number of the (accused opioid sellers) I represent are addicts themselves; they’re generally trying to support their own habits,” said LaSalle County Public Defender Tim Cappellini. “Putting them in jail would go totally against the trend of trying to get treatment for many of these folks.”

But Miskell said opioids, which claimed nearly 50,000 American lives in 2017, are different from other drugs. Everyone in the illegal distribution chain, from foreign kingpins to street corner dealers, knows they’re selling a potentially lethal substance, and should be treated accordingly, he said.

“At what point do you get frustrated enough to say you’ve got to do something?” he said. “More people die every day of heroin overdoses in this country than die in the war zones in Iraq and Afghanistan. How the (expletive) does that happen?”

Nickie Martin’s story is sadly familiar in the age of opioids. Her family said she was an honor student growing up in Ottawa — “She never had to bring a book home and she made straight A’s,” said her father, Don Martin — but went badly off track at 15 when a boyfriend introduced her to heroin.

From there, her life was a series of disasters. She was arrested again and again and spent two years incarcerated on a forgery charge. Her parents said she overdosed at least a dozen times, including when she was pregnant.

The family spent thousands of dollars on treatment programs, but nothing seemed to work, her father said.

“We had her down at one place for three months,” he said. “They said there was a 98% chance she would be clean, never want to do it again. Well, she must have been the 2%. She got back here and within two months, she met up with the crowd again and they got her using.”

Miskell met Martin in 2017 when she came looking for help on a child support case. He ended up representing her when she was arrested for driving under the influence of drugs, and came to view her as a “project” — someone deserving of extra assistance.

“I thought she was smart,” Miskell said. “She was well-spoken. She seemed so determined to beat it. … She was ready to step up, get better and become a mom.”

He kept her out of jail, mentored her and helped her reclaim two of her children (her third, a 3-year-old boy, remained in the guardianship of her parents). From what he could see, the help was working: In early April, he encountered her outside the LaSalle County courthouse when she was headed to see her probation officer, and thought she was in good shape.

She wasn’t. Her parents said she had resumed using heroin after months of abstinence, and had just returned to Ottawa from yet another treatment center. According to a police report, she told an acquaintance she was suffering from withdrawal symptoms after leaving a methadone program.

Martin never made it to her probation appointment. The department called police when she didn’t show, and that afternoon, officers found her body in a motel room.

The case file says officers interviewed someone who acknowledged selling Martin a few pills of clonazepam, an anti-anxiety medication. But no one has been arrested for providing Martin the heroin and fentanyl that killed her.

“Tracking that to (a specific dealer) is difficult to do after the fact — that’s the problem,” said Ottawa police Chief Brent Roalson.

Martin’s death crystallized misgivings Miskell had harbored for months. When small-time drug dealers weren’t escaping punishment entirely, he said, they were getting probation, a sentence they regarded as the cost of doing business.

He had come to view the illegal opioid business as terrorism — an international, organized group of criminals intent on spreading death. He had little sympathy for any of the participants, even those who sell to feed their addictions.

“I’m talking about them all,” he said. “If you’re a little gangbanger that’s walking around selling to your neighborhood people, you go. You’re a terrorist. You’re part of the cell. At every level, each of these people should be held accountable.”

He sent his letter outlining the proposal to Pritzker and Trump four days after Martin died. The governor’s office returned a form letter — “I appreciate hearing from you about issues that matter in your life” — while the White House hasn’t responded.

A Pritkzer spokesman did not return a message from the Tribune seeking comment. The Office of National Drug Control Policy said the Trump administration “is prosecuting more fentanyl traffickers than ever before” and supports legislation that would toughen criminal sentences related to the drug.

William Banks, a law professor who founded the Institute for National Security and Counterterrorism at Syracuse University, said defining opioid trafficking as terrorism would be a stretch. By law, he said, terrorism is about “striking fear into the general population through the threat or actual delivery of violence,” and drug offenses wouldn’t appear to qualify.

“I don’t see how or why anyone would want to prosecute heroin distribution under a terrorism statute,” he said. “The penalties (for trafficking) are already extremely high, so I don’t understand what point would be made.”

Miskell granted the odds of success weren’t good, but said the president could still bulldoze the proposal into the public consciousness. Treating drug dealers like terrorists would be a wedge issue no Democrat would support, he said, and would hit favorite Trump hot buttons like crime and border security.

“If we had normal apparatuses in politics right now, what would be the point?” he told the Tribune. “But you write a good article and I’m gonna get a tweet.”

“Not a good idea”

Closer to home, it’s hard to find support for Miskell’s plan. The Illinois Association of Criminal Defense Lawyers called it “unconscionable” for a defense attorney to push for tougher penalties. Cappellini, the public defender, said it was “certainly not a good idea.”

Roalson said the Ottawa Police Department, like many others, is moving away from a punitive approach. He has helped drug users get into treatment, he said, and doesn’t believe low-level sellers struggling with addiction deserve prison.

“It’s hard to generalize that anyone who provides an illegal substance like that should be held accountable for a terrorist act,” he said.

“In my eyes, the only thing that resembles domestic terrorism are unethical pharmaceutical practices and the continuance of decades (of the) old failed war on drugs,” said Luke Tomsha, a former heroin user who runs a harm-reduction organization called Perfectly Flawed.

“Ninety-nine percent of active users also sell or facilitate drug use,” said Debbie Hallam, who lost a son to an overdose. “If you want to put people in jail for selling opioids, our jails are going to be so overpopulated we’re not going to know what to do.”

“His action is the opposite of what I think needs to be done,” said Lori Brown, whose son also fatally overdosed.

But two people with no qualms about Miskell’s proposal are Don and Diann Martin.

They are raising Nickie’s children, and watching the two boys play outside their Ottawa home, they remembered their 16 years of pain — the lying, the stealing, the deception, the arrests, the relapses, the overdoses, the hopes endlessly raised and dashed.

For Don Martin, it didn’t even peak with Nickie’s death. Three weeks later, a daughter from an earlier relationship also died of a drug overdose. The half-sisters are buried next to each other in a nearby cemetery.

Diann Martin said Nickie was occasionally involved in heroin sales, a hustle that under Miskell’s plan would have netted her a lengthy prison sentence. Martin said she would have been OK with that.

“She’d be safe,” she said through tears. “I’d rather see her in prison than dead.”